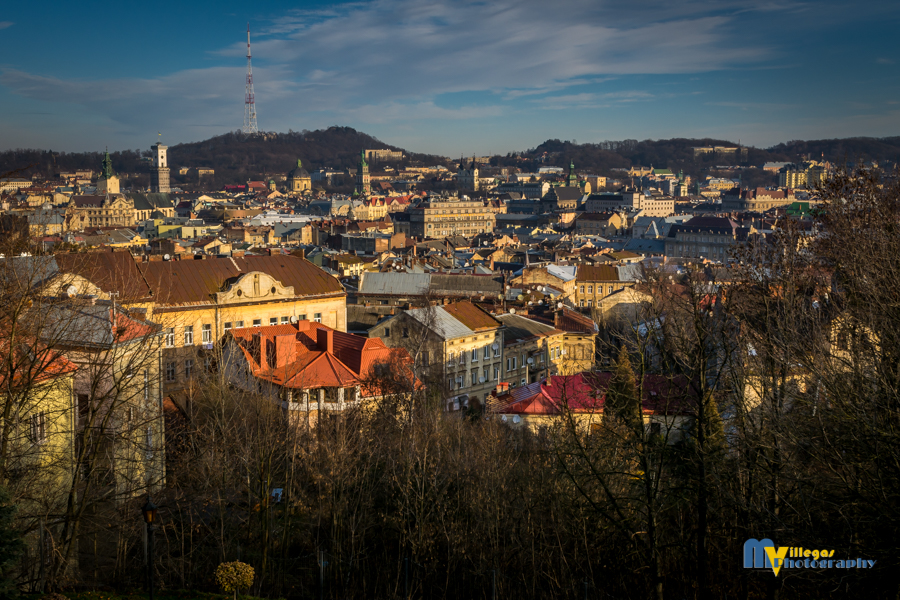 What do you get when you cross Galicia (the central European one, not the Spanish one), Tatars, Mongolia, Poland, Austria, Germany, Russia and Ukraine?  No, really…

Walking through the streets of the very beautiful and ancient city of Lviv in western Ukraine is like walking in a living and breathing fairy tale.  It lies just shy of 70 km east of Poland and it boasts an official classification as a Unesco World Heritage Site.  The architecture is a mix of Gothic, Habsburg and Ottoman influenced buildings and decor.  The beautiful cobblestone streets are reminiscent of such European gems as Prague and Kraków.

Lviv is one of the oldest living cities in all of Europe and its history is filled with all of the characteristic ethnic madness of Central Europe plus a good measure of its own brand of kookoo.  It was founded in the year 1260 by King Daniel of Galicia who named the city after his son, Lev (Lion) Danylovych.  Today this historical city is known as the “City of Lions” in honor of that very same son.  Lions decorate the city’s coat of arms as well various buildings, parks and plazas.  The city has seen its share of invaders throughout its history starting with the Tatars less than a year after its foundation.  The city was razed and remained so until King Daniel died in 1270.  The newly crowned King Lev rebuilt the town and made it the capital of the Galicia-Volhynia kingdom and his home.

King Lev had a tendency to pick a lot of fights with his neighbors (guess he took that whole “lion” thing a little too seriously) and was soon allied with the Tatar Mongols and acquired their help to attempt to take the city of Kraków in Poland.  They got pretty far into Poland but failed to take Kraków, try as they might.  He also successfully plotted the assassination of the Grand Duke of Lithuania in order to get his brother into the Lithuanian throne and even fought and defeated the Kingdom of Hungary which must have made for some awkward situations at home considering his wife was the daughter of Bela IV of Hungary.

After King Lev died, the city was under the control of the Voivod Dmitry Detko until 1349 when the Polish king Casimir the third invaded and took the city, renaming it to Lwow.  By this time, there was a considerable Polish population already in the city of Lviv.  Polish migrants who had fled the famine in Kraków had flocked to Lviv years before.  King Casimir decided to turn Lviv into a Polish city both politically and culturally thereby pissing off the Lithuanians to no end who in turn destroyed Lviv setting it on fire.  Casimir rebuilt the city and fortified it with walls made of stone.  He made sure the buildings were made of stone as well.  Smart thinking after watching the city burned to the ground by the Lithuanians.

Later in 1648 the Cossack and Crimean Tatar revolutionaries invaded the city in their effort to destabilize the Polish-Lithuanian Commonwealth.  They murdered everyone in the high castle but did not ransack the city.  Instead they accepted a rather large ransom and moved on to other cities.  So technically, it is said that Lwow was one of the two Polish cities that did not fall to “The Deluge”.  Goes to show you that everything is perspective and how you decorate it.

During this same period Lwow was also the place where the Polish King John II Casimir made his renowned “Lwow Oath” in which he exhorted every citizen, noble and peasant alike, of the Commonwealth to take arms against the invading armies of Sweden and Russia and defend Poland.   A devout Catholic, he declared Poland under the protection of the Blessed Virgin Mary in a very elaborate ceremony with the Papal Legate.  He promised to the peasantry a number of benefits to improve their conditions in exchange for their help.  By 1661 the invaders had been sent back home with their tails between their legs and, of course, none of the promises to the peasants were kept by the nobility.  Not a lot of money in liberties for others.

Even the Ottomans had their turn at Lwow in 1672 but were unable to take the city.  Abraham the Fat (yes… that really was his name) came to Lwow with 20,000 infantry and cavalry to face off against King John III Sobieski and his mere 6000 men.  This battle is considered one of the greatest military achievements in history and is studied even today in military battle strategy.  Long story short, Sobieski took advantage of the terrain and with much smaller numbers than his aggressor and in a very short amount of time he was able to turn the Ottomans on their tails.

Lwow came to fall into the lap of Austria and the Habsburg Empire after the first Partition of Poland and was renamed to Lemberg.  During this time, it experienced a huge population and economic growth thus becoming the capital of Galicia and Lodomeria.  The Habsburgs tried all they could to “Germanize” Lemberg.  They opened German Universities, published German newspapers and formalized German as the official language.  The people of Lemberg responded by making up their own dialect which took a lot of its etymology from the Polish language.  Once the Ausgleich came around in 1867 the people of Lemberg had had enough of the attempts at Germanization and took advantage of the formation of the dualist Austria-Hungary to begin their fight for the liberation of Galicia from Austrian rule and gained a great many liberties and concessions from the Austro-Hungarian Empire as an autonomous province.  Their first action was to rename the city back to Lviv.

The city continued to grow steadily becoming one the most important Polish, Ukrainian and Jewish cultural centers of Europe.  After the First World War and the fall of the Habsburg Empire, the tensions between these very diverse and contrary communities became more evident and heated, most particularly between the Polish and Ukrainian nations who both considered the city to belong to them.  The Ukrainians declared Lviv to be their capital and sent a contingent of soldiers to secure it only to be confronted and defeated by the heavily armed majority Polish population.  By 1923 Lviv was internationally recognized as a Polish city even though there remained a rather large group of Ukrainian people in the region.

Fast forward to 1939 and the megalomaniac ambitions of a funny moustached little dude from Germany named Adolph Hitler brought Lviv into light again when it was taken by the Nazis during the German invasion of Poland.  Curiously enough another funny moustached fat dude from the USSR with megalomaniac ambitions named Joseph Stalin decided to invade Poland as well and took Lviv from the Germans just 16 days later.  OF course, the people of Lviv were no better off and many in the Polish and Ukrainian communities were arrested and imprisoned.

When the Nazis invaded again in 1941 they were able to take the city from the Russians and found that the evacuating Russian soldiers killed most of the prisoners in cold blood.  Ukrainian Nationalists along with ethnic Ukrainians were allowed by the Nazis to take revenge against the Polish and Bolshevik Jews who were considered to be supporters of the previous USSR invasion.  This horrible massacre is known as “The First Pogrom” and highlights one of mankind’s most horrible points in history.  Between 4000 and 10,000 Jews were killed in various horrible ways by crowds of angry mobs in just two days.  The rest of the Polish population didn’t fare too well either during the Nazi occupation.  The ethnic Ukrainian Galicians however were considered by the Nazis to be more Aryan and were treated better.  Jews were hunted down as was the Third Reich’s racial policy and either killed outright or sent to concentration camps.  At the start of the Nazi occupation, Lviv counted with close to 100,000 Jews living in the city.  By the end of the war, that number fell to around 300.

During the fall of Nazi Germany, the Polish Home Army (the Polish Resistance in Lviv) took the city from the Germans but were themselves quickly routed by the invading Soviets who were happy to thank them for removing the Germans from Lviv but weary of their loyalty to Poland.  Because of this, the Polish Army commanders were arrested and many sent to the gulags.  No good deed went unpunished in Stalin’s Russia,

By 1946 Lviv became a part of the Soviet Union and was once again renamed.  This time to Lvov.  Over 100,000 Poles were resettled to other parts of Poland and immigration of Russians and Russian speaking Ukrainians was strongly encouraged.  The ethnic composition of the city changed completely but the desire of the Ukrainian people to rule themselves never left them.  The Ukrainian dissident movement was very strong there and the city played a large part in the independence of Ukraine in 1991 during which time the city was once again renamed to Lviv.

Today, Ukraine continues its struggle against the powers that tug at it from the east and west.  Most recently, Russia has reclaimed the region of Crimea in eastern Ukraine as their own.  Western Ukrainians who consider themselves to be much more European than eastern Ukrainians watch with a careful eye at their eastern neighbor.  Lviv sits at the center of these cultural and political differences as it appears to always have done since it was founded.  But even with all of this dark history and all the convoluted ethnic madness it has witnessed, Lviv stands tall and proud in all of its splendor and beauty.

I personally find ethnic wars to be a thing of lesser beings who cannot see past their own petty greed and stupidity.  Looking at a city such as Lviv and seeing the marvels of architectural beauty that its historical ethnic diversity has created, it becomes impossible for me to understand how some people cannot see that ethnic diversity makes us stronger and more beautiful.  It is ironic that the same diversity that created such magnificence is also responsible for the horrors that the city has witnessed.  One hopes that these kinds of insights would not pass unperceived by the human race.  Perhaps one day.

In any case, the city of Lviv in western Ukraine is a must-see.  Once you are there, you must stop at the handmade chocolate factory in the city center.  A visit to the five story building will not only delight you but will reward you with some of the most delicious chocolate treats you will find in all of Europe.  They do have a very strict rule there though…  it is prohibited to wipe the chocolate from your fingers and lips with a napkin or handkerchief.  You must lick it off.  Believe me, when you try their decadent treats you will have no problem at all following their rules.

Be sure to take in the multitude of Lions that pepper the city as well.  Statues of lions are everywhere you look and each lion is said to hold the soul of a famous citizen of Lviv’s past.  Indeed, no two lions are alike.  The legacy of King Lev, it seems, continues to this day through these silent memories to his name.  They demonstrate a powerful image of Lviv’s ability to remain true to its identity through numerous empires that have come and gone.

See you soon somewhere on this beautiful earth.

2 thoughts on “A Lion by any other name… Lviv, Ukraine”